For a list of equipment available in our lab, search for the ‘SolarSpec’ QReserve site over here. 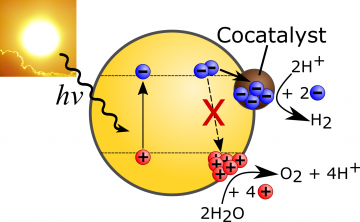 Systems that generate solar fuels, such as hydrogen from photocatalytic water splitting, fall within two broad categories: 1) high efficiency but complex and expensive, 2) low efficiency but simple and cheap. In both cases, the cost of the energy stored in the hydrogen produced remains high compared to traditional fossil fuel-derived energy. The cost-efficiency gap needs to be addressed for viable commercialization of this promising sustainable energy source. The approach we are taking is to start with the simplest, cheapest materials and understand what limits their efficiencies in order to overcome these barriers.

To become cost competitive and see widespread adoption, high photocatalytic efficiencies need to be obtained through scalable manufacturing technologies and use abundant and inexpensive elements rather than rare elements with limited reserves. Carbon nitride (CNx), an organic polymer composed of earth abundant carbon, nitrogen and hydrogen atoms, is so far a leading candidate to fill this need. CNx absorbs visible light, is easy to synthesize from inexpensive precursors such as urea, and shows outstanding chemical and photo stability.

Our initial investigations have revealed the presence of a high density of trap states in some of the best performing CNx known to date. Importantly, these trap states reduce the hydrogen production efficiency. Charges relax and lose a significant amount of energy as they fill these trap states, effectively stopping electron transfer to the proton reduction sites. We have set out to better understand the impact of these trap states, and devise synthetic procedures to reduce their prevalence. 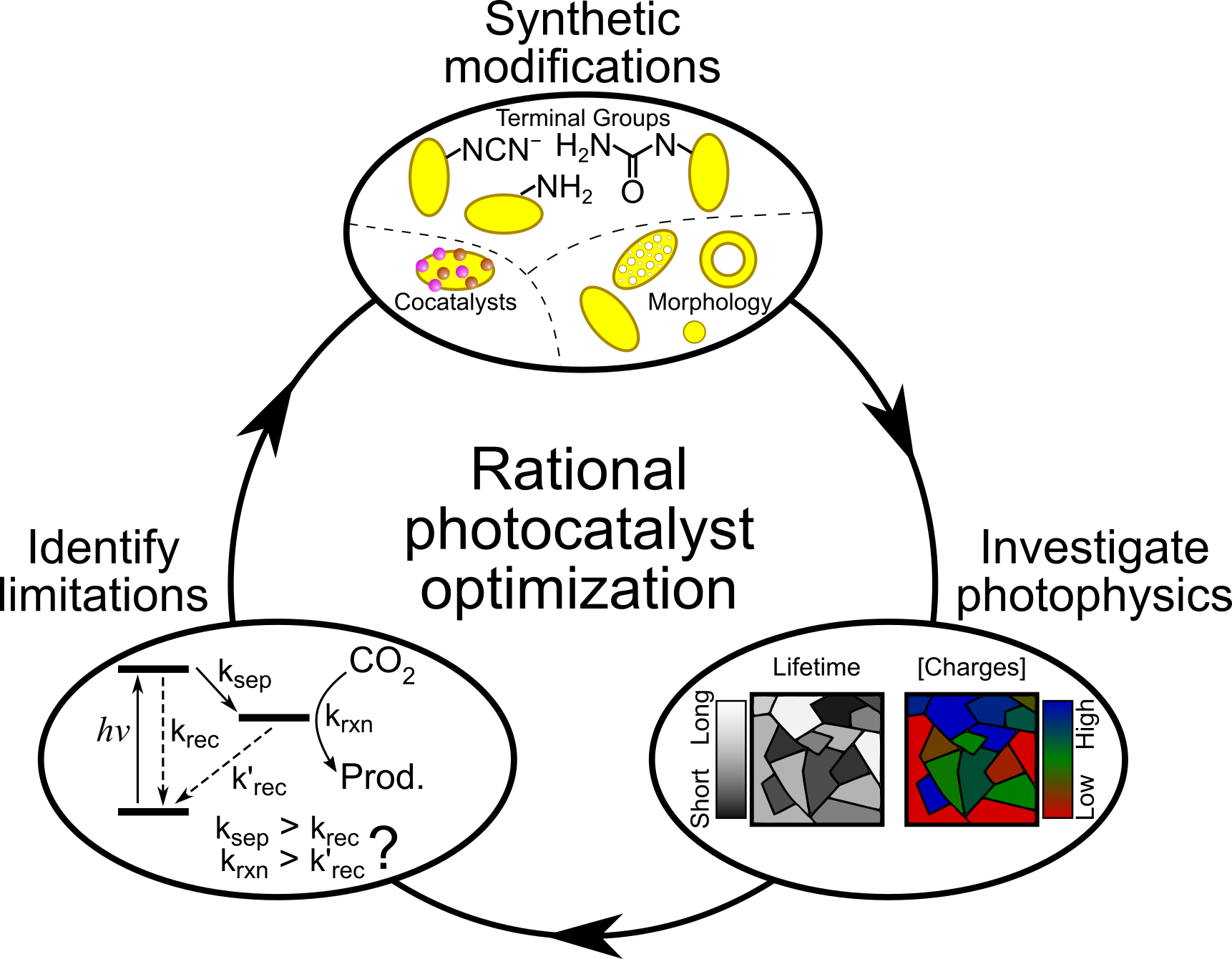 The simple synthetic procedure to make CNx – heating organic powders to high temperatures – allows for a high level of tunability and customisation. Various methods have been established to control aspects such as doping levels, 3D structure and morphology, chemical groups, and to make heterojunctions with a wide range of other materials. While these modifications can dramatically change the photocatalytic activity of the resulting CNx, we often lack a clear picture of the charge carrier dynamics that would allow us to progress further. We will undertake systematic investigations to link the CNx chemical and physical structure with the charge carrier dynamics to develop a holistic view of the photophysical impact of CNx modifications and clarify what controls the solar energy conversion efficiency.

Carbon dots, nanoparticles mainly made of carbon, are another exciting class of low-cost, carbon-based photocatalysts. Different types of carbon dots can be distinguished based on the hybridization and arrangement of the carbon atoms, and whether quantum confinement is at play: graphene quantum dots are nanoscopic 2D sheets of graphene with sp2 hybridized carbons; carbon quantum dots have a crystalline graphitic core predominantly with sp2 hybridization; carbon nanodots are amorphous, containing both sp2 and sp3 hybridized carbons, and their excited states are dominated by molecular effects. Although these categories might appear to be neat and tidy, these are best though of as limiting cases and the reality often falls in between them. The ambiguity in the precise structure of synthesized carbon dots has hampered efforts to develop clear models that explain the photophysical behaviour of these intriguing materials. Fundamental questions regarding the nature of the excited state (e.g. excitonic vs separated charges, singlet vs triplet spin state) still remain, and impede progress in incorporating these materials into functional devices. The advanced optical techniques developed in the lab will be useful in answering some of the questions, and give us greater insights in the key parameters that dictate the photophysics of carbon dots.